Why do elections have deadlines? Why do we have a big event where everyone votes for a few days, and then we have to live with the results for years?

An elected official is just an employee of the people right? So if a private company can hire or fire employees essentially at will, why can't we replace our elected officials at will? Certainly there are logistical questions to consider, and not all decisions are so easily reversible. But does every election have to have a deadline? Especially for private organizations like clubs or cooperatives where the stakes aren't as high as government, could we make some decisions more fluidly?

Most of us have never even thought to ask questions like these. Elections having deadlines is just "how it is", we can't imagine it any other way. But I want to convince you it's one of the most important questions we could ask. The fact that elections are time-limited events with an arbitrary deadline causes a huge number of problems. And I'm convinced unraveling this hidden assumption is the secret to unraveling democratic coordination itself.

Here are some deadline problems that wouldn't exist without an arbitrary time limitation.

Importantly, when I say any time I recognize it would be bad for the mayor to switch four times in an hour. With a few important design choices such as stabilization buckets and update cycles, we can get rid of deadline problems and get some even more exciting benefits without introducing any new serious problems.

First let's establish the basic assumptions of Persistent Democracy, the ones that will matter in every other system:

It shouldn't matter exactly how many weights each person has, since weights can be split up by placing a decimal quantity such as 0.5, but obviously in a democratic society all voters will have the same amount of weights. It might however make sense for private organizations using Persistent Democracy to give different people different amounts of weights.

There are many different ways for these weights to actually effect decisions, and different ways are better for making different kinds of decisions! But they'll all fall into two categories:

Our elections for public servants such as mayors, police chiefs, sanitation commissioners, etc, are all reversible decisions. These people are just employees of our shared governance bodies, and in the same way we allow private companies to replace their employees at basically any time, we should be able to replace our public servants at basically any time.

As eluded to earlier, it would be inefficient and chaotic for changes to happen too quickly. We need some stabilization method that keeps the current winner from switching too quickly, and the concept of "stabilization buckets" fits nicely.

Stabilization buckets ensure elections don't change too rapidly by making a new winner hold their advantage for a period of time before becoming the new winner. 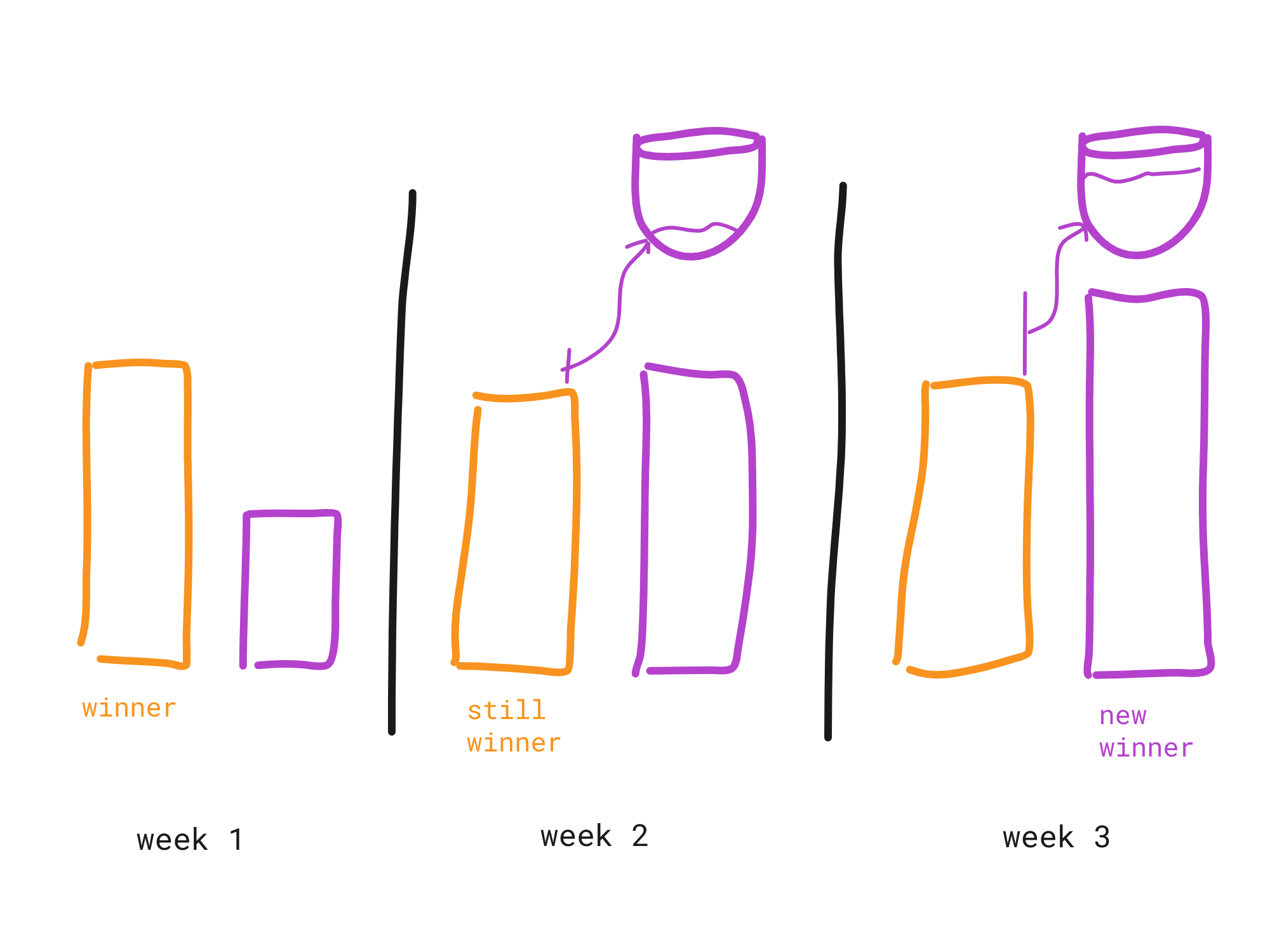 How "big" are these stabilization buckets? In general if the buckets are "bigger" they take longer to fill and the election result will take longer to change, making it more "stable". I don't have a precise algorithm for you at this point, but it seems it should follow these principles:

It also wouldn't be great for the vote differences to be published instantly, since it would be annoying and stressful for people to worry about what vote changes might be happening at all different hours. 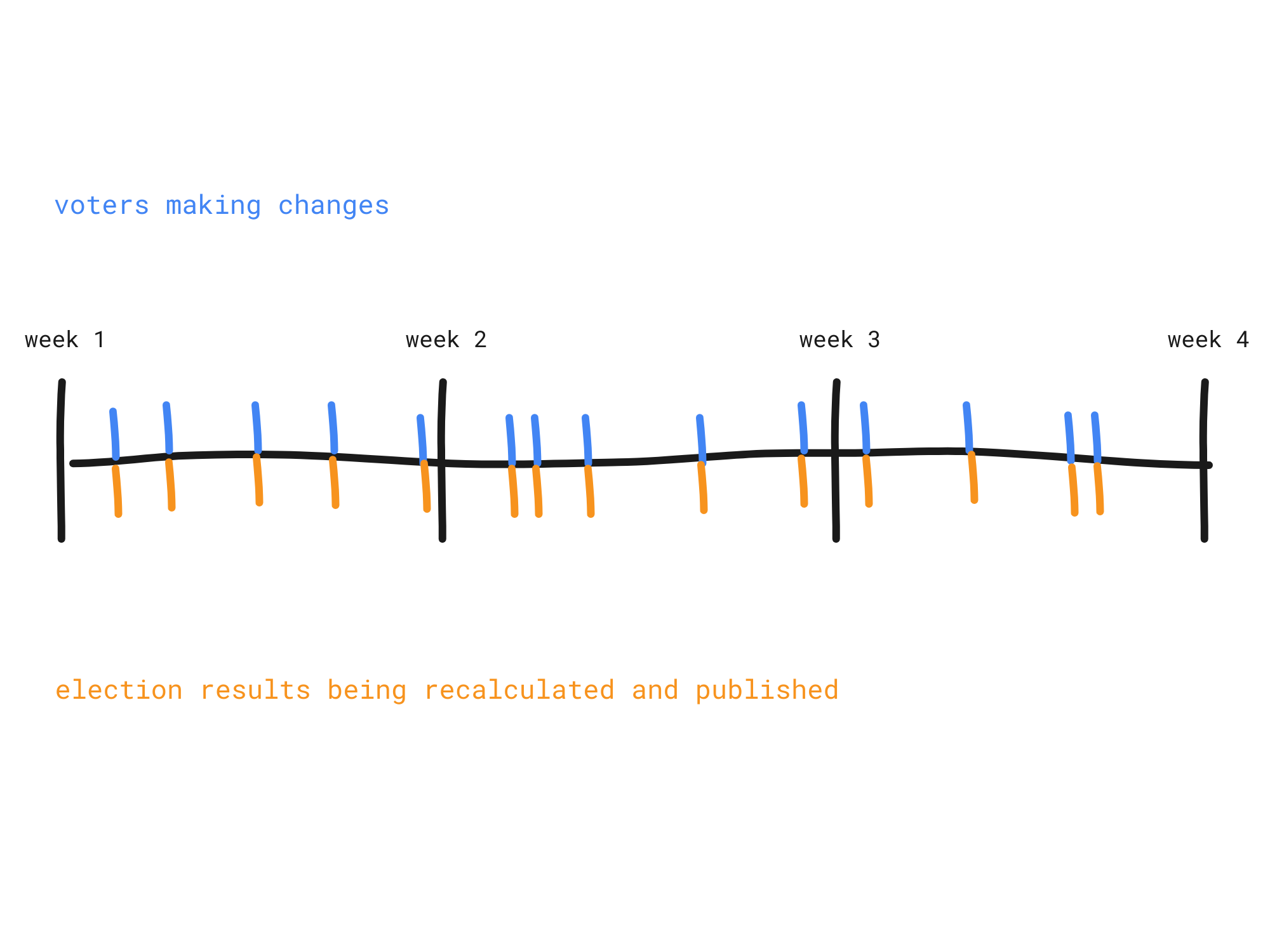 Publishing and recalculation shouldn't happen instantaneously. Electorates should be able to choose some periodic update schedule at which votes are actually tabulated and published, with all vote changes being batched until the update time arrives. This would allow each member to only worry about their votes at most one time in every update cycle. 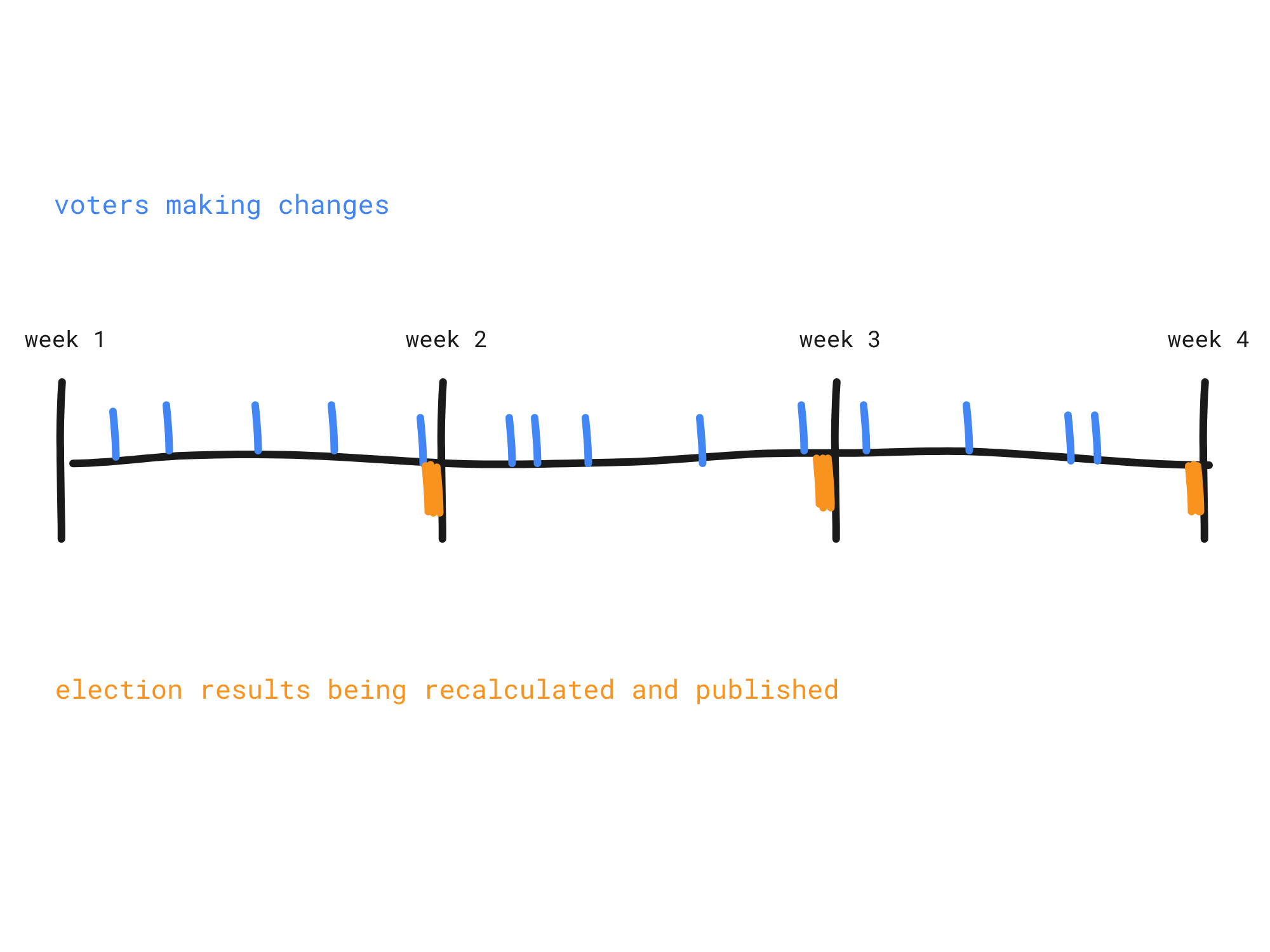 Why is Persistent Voting exciting?

Persistent Voting allows true direct democracy to be efficient and stable. Since voters can change their vote in any election at any time, they can participate in only the decisions they're actually concerned about while leaving other decisions for other voters. This means they can have many more possible decisions available to them without becoming overwhelmed.

It even allows "auto-pilot democracy", where low voter turnout is essentially a nonissue. If some concerned minority makes most of the electoral choices, and everyone else is perfectly fine with those choices, then the majority can just not participate without worry. If the concerned minority begins making harmful or foolish choices in some elections, the rest of society can simply move weights into those elections to override them before harm is done.

We theorize Persistent Voting will have many massive benefits:

Persistent Voting also inherits the benefits of resource voting systems. If a vote must be done with a scarce resource of voting weights it is much more likely a true signal of a real preference. Voting for one option comes at the exclusion of all other options, so voters will tend to use their weights only for issues of high relative concern and high relative confidence. And since weights can be used for negative votes, this allows people who are highly confident they don't find some option acceptable to still express that preference, even if they aren't sure what the right answer is. This encourages creativity and communication and persuasion and compromise to find new options that are broadly acceptable to all concerned. This would tend to dissolve "tyranny of the majority" problems, which happen when a majority who isn't actually very concerned with something casually supports it.

In general resource voting systems put a stop to "spam voting", where a voter casts a vote they aren't actually concerned with or convinced of simply because it costs them nothing to do so. It is likely many of the issues that appear violently heated in our current political environment would quickly deflate as previously zealous voters realize they don't actually care enough to sacrifice scarce votes.

But to me the most exciting benefit is that it would be reasonable to directly elect documents, such as constitutions, tax codes, legal definitions, or anything else. These elections would work just the same as those for officials, where voters nominate documents and whichever document has the current greatest amount of support is the one that's in effect.

If it's possible for any voter to create, nominate, and vote for constitutional documents, this means every decision of the group can be made democratically. Constitutions define how the entire system beneath them functions, what specific decisions can be made, what elected officials there are and their responsibilities, what the broad limitations are, and everything else. Any specific decision-making tool can be chosen based on how well it fits with the decision in question.

If these constitutions are written in a computable governance code, then the constitutional document can even be used to automatically generate voting software or institutional servers. Doing this would be especially useful in private organizations.

As a simple example, a constitution could "split off" the decisions for the legal code, agencies and officials, budget, and the district map. 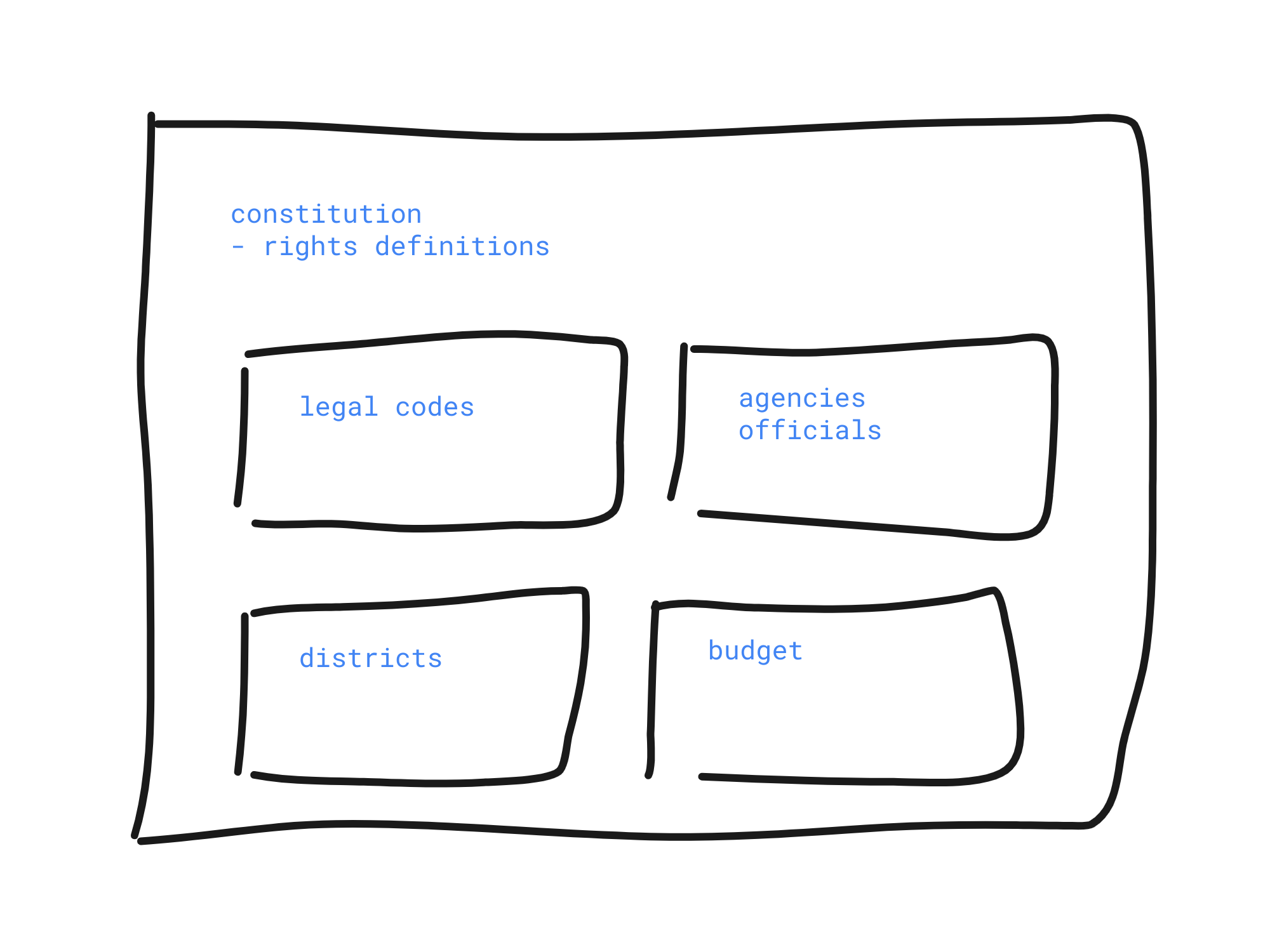 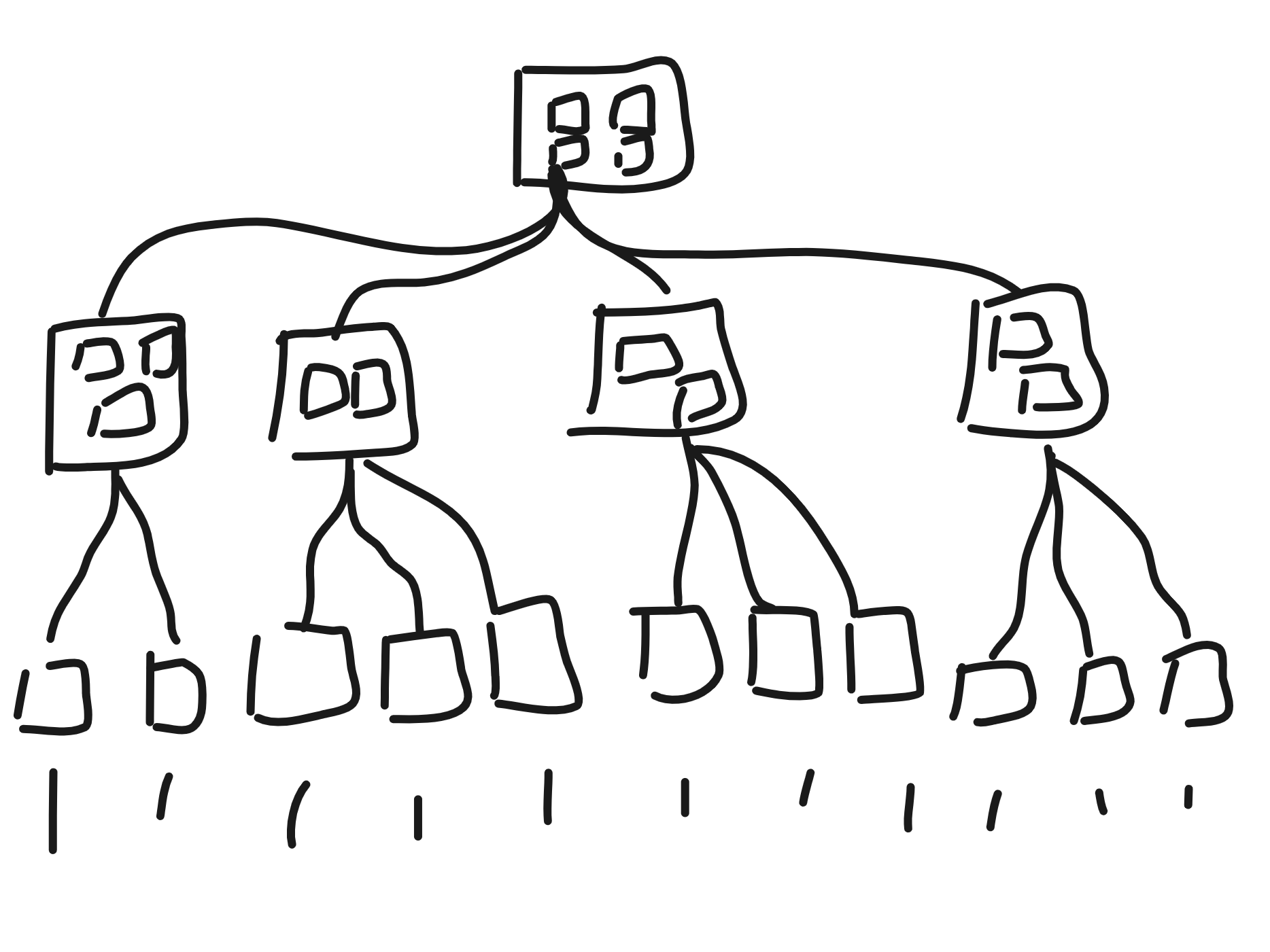 How are votes actually added up?

Persistent Voting is just a different paradigm for thinking about voting, so it can be "wrapped around" any specific voting method to decide how to actually add up votes. Any inner voting method that can account for the concept of voting weights could technically work, but different voting methods have different qualities and so not all would be as effective.

If you're interested in the details of this question, check out these chapters:

Not all decisions are reversible! Many of the most consequential decisions we make, such as all those that spend resources, are irreversible.

Persistent Democracy can still be used to make irreversible decisions, it just has to do so more carefully. The whole point of Persistent Voting is that it removes election deadlines, but with true commitments we can't avoid some sort of deadline. However we can mitigate the negative effects of deadlines by leaning all the way into the principles of conviction voting. Here's how a persistent commitment works, visit the theory page for the exact details: 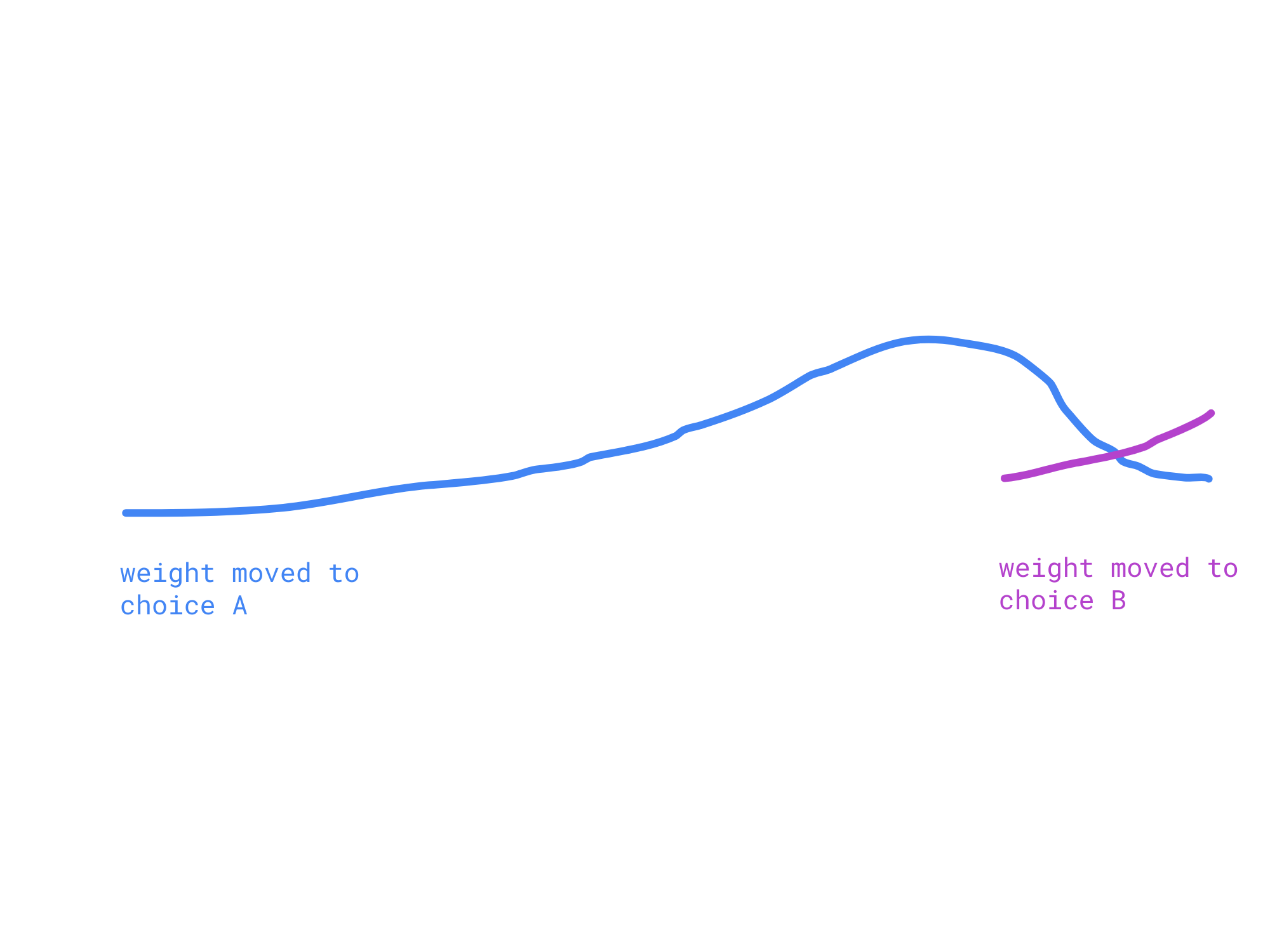 This process is designed to reward durable and consistent voting, and to prevent weird strategic swings or surprises right before the deadline. Since commitments have to be made more carefully we want to err on the side of choices that are better understood. It would likely make sense to require every commitment to have some safe "do nothing" option (such as always using the previous document for cyclical commitments or literally "do nothing" for one-time commitments) that accumulates votes as if all the non-participating voters selected that option with an equal division of weights across all elections.

This system doesn't seem to offer any unique benefits that aren't also enjoyed by Persistent Democracy, and could fall victim to a pretty nasty problem: "lazy demagoguery". Liquid democracy would make it easy for a voter to just delegate huge amounts of their votes to someone they shallowly like such as a media personality, and never bother to check on what those votes are being used for. Those kinds of concentrations of voting power would be a problematic vulnerability, and are completely avoidable.

Persistent Democracy just as powerfully supports delegation as liquid democracy, but in a simpler way: "delegation by abstention". If you don't care about an issue, or aren't confident you know enough about it to have a useful opinion, just don't vote on it and allow others to make the decision. You can always change your mind and move weights into that election at some later time. Stabilization buckets should be designed to make more important decisions take longer to change, giving you more time to notice them if you actually do care.

Nothing can change the fact that people will listen to others and be swayed by their opinions, so there will always be some amount of "delegation by persuasion". It's unnecessary to directly encode delegation into the system itself when we can just allow natural delegation in a simpler design. We ought to require that a voter actually changes their votes themselves, whatever that happens to mean in the specific context.

There are tons of specific details to get right when designing a completely new system for democratic decision-making. In this chapter I've already pointed to other detail chapters, but I'll list them again here, along with others I think you might find interesting at this point.

Otherwise, head to the next chapter!