Humanity is headed toward a cliff, and we have no choice but to change course.

People of different political persuasions fight endlessly about exactly what's wrong, and what we should do to fix it, but I think most of us agree, something needs to be done.

Here are the issues I personally am most concerned about:

You're welcome to disagree about the details of those fears, but you don't have to look far to find strong evidence for all of them.

How can we possibly solve all these problems? Each of them individually would be incredibly dangerous and destructive, but they overlap in devilish ways. Each reinforces and exacerbates the others, tying the whole collection into a paralyzing Gordian knot. This is impossible right?

I don't think this is impossible, quite the opposite. I think the intertwined nature of these problems isn't an obstacle, but the secret to solving them all.

I am convinced these problems are all coordination problems. They have arisen because we lack effective tools to help us work together and resolve conflicts.

To show you why I'm convinced this is the case, let's first ask this question: why is our current democracy so broken?

Our current democracy is broken because of Plurality Voting

When most of us hear "voting" or "election" or "democracy", we mistakenly assume the method called Plurality Voting must be involved. Plurality Voting is the very simple method where each voter only gets to vote for one candidate.

There are many other ways to conduct a vote or make a democratic decision! As simple and intuitive as Plurality Voting is, Plurality Voting is awful. Many researchers are convinced the only voting method that is both as simple and worse is random chance! If we're trying to create a functional and prosperous democracy, we're using the wrong tools for the job.

Why is Plurality Voting awful? Mostly because it has irrational outcomes when there are three or more candidates. Plurality Voting is effected by the spoiler effect or "vote splitting", where the winner of an election is changed by non-winning candidates entering the election. 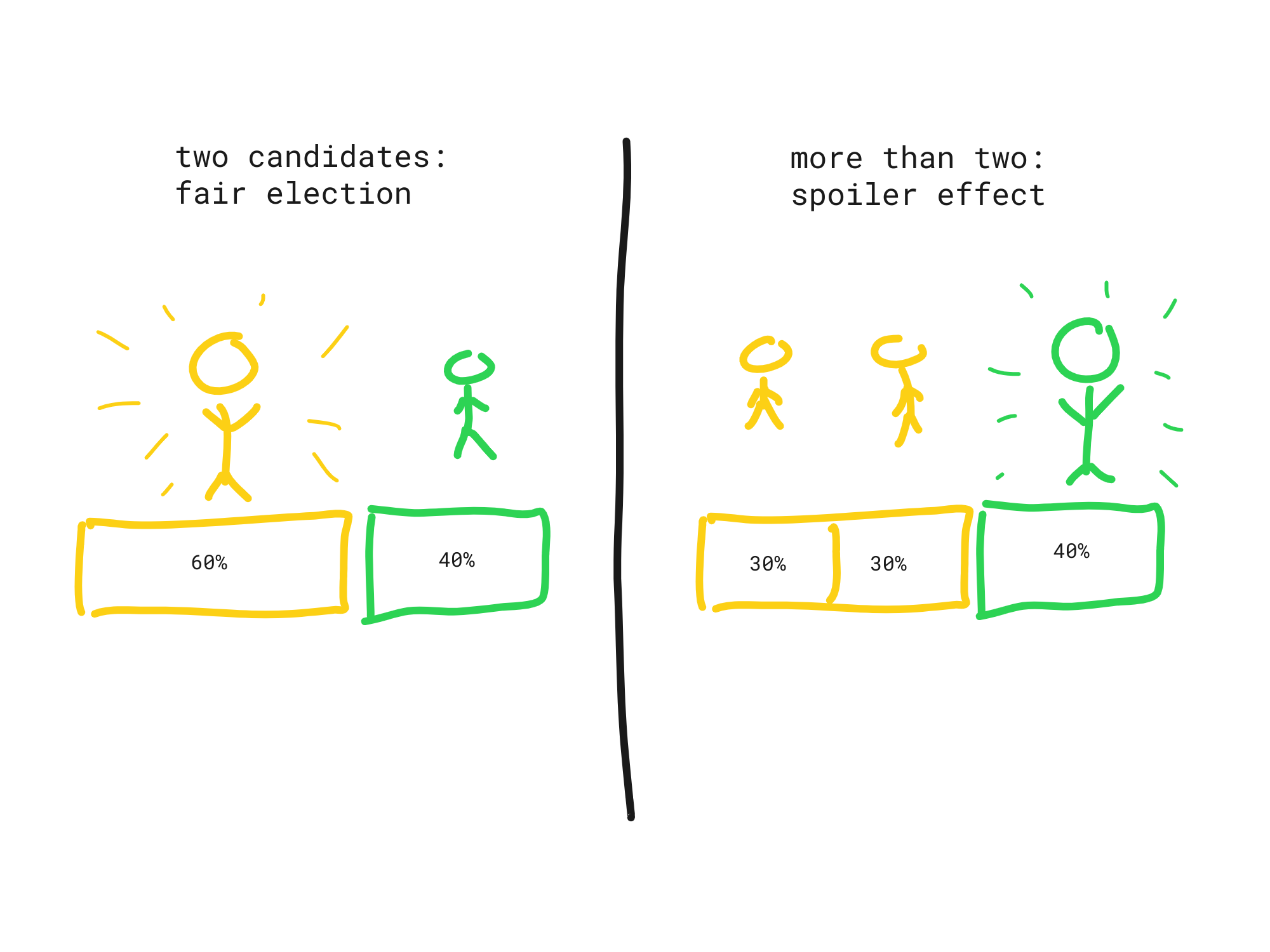 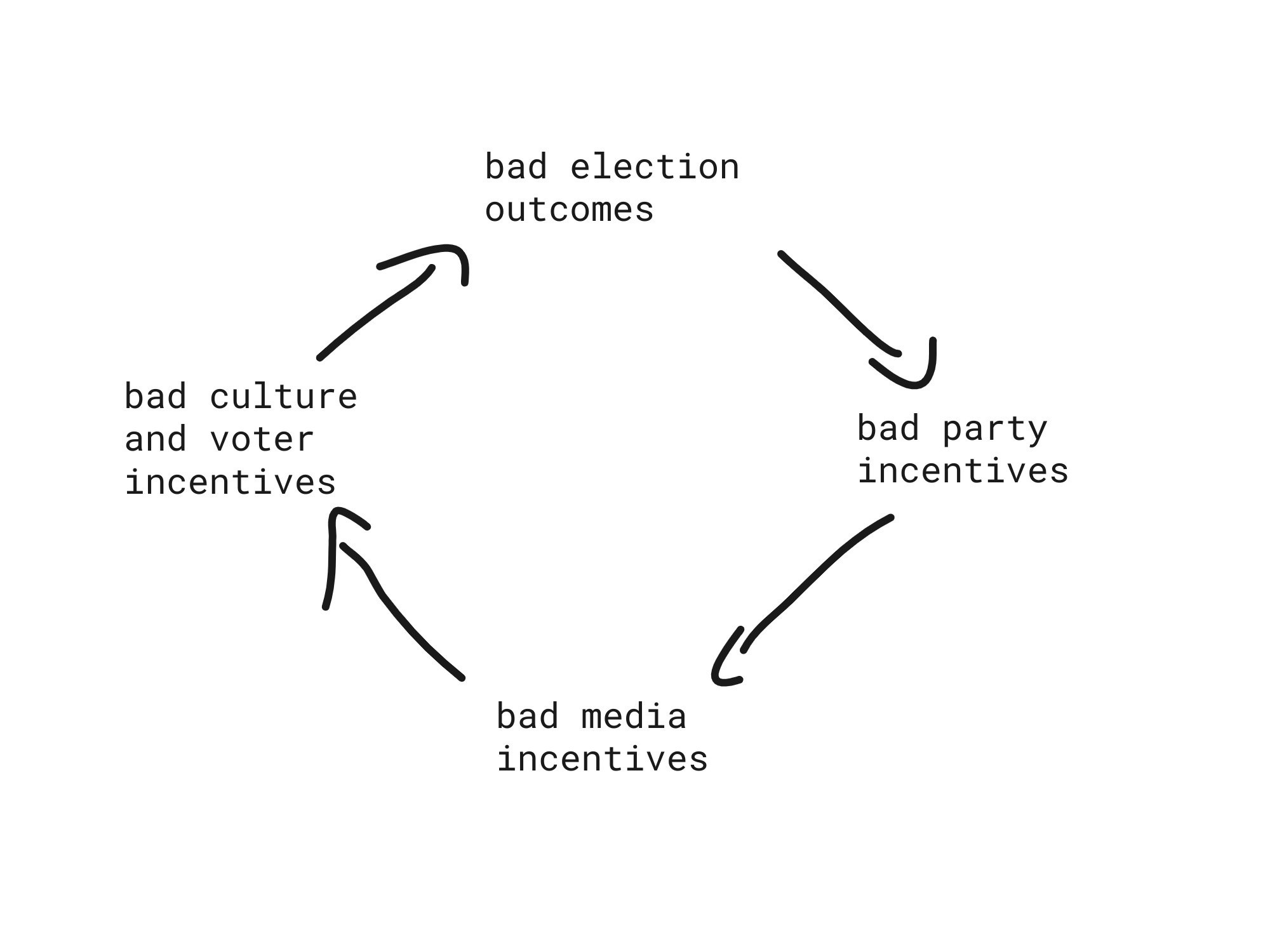 And of course there are other problems. Go read the voting methods detail chapter if you're interested in a deeper exploration.

Here's my main point: Plurality Voting is awful because of its mathematical structure. Structure determines function, in physics and biology and logic/math. If you use a structurally bad voting system, you will get a structurally bad political entity.

We can solve this problem by designing and using better coordination systems.

From the very beginning of our history as hunter-gatherers, the capability that set us apart from other animals was our ability to work together to achieve shared goals. It's not that we could cooperate (many other animals cooperate in many ways), but our ability to pursue complex cooperation, to encode arbitrary information and plans in language and then act using that information.

All our modern prosperity is rooted in our ability to cooperate. The achievements of science and technology are only possible through cooperation. Passing down a culture is an act of cooperation that can continue for many generations. Our complex societies are made possible using governments and organizations that help us cooperate more effectively.

But as much as we've empowered ourselves using complex rules for cooperation, we don't always get it right, as shown by the Plurality Voting problem. Political systems can just as easily be designed by accident or convenience (or malice or greed) as by careful logic. Frustratingly, no existing political system has managed to scale democracy.

Democracy simply means giving all members of a group an equal amount of decision-making power, and many people believe such a thing isn't even possible at scale. So in practice we end up with creaky hodge-podges of fairly arbitrary rules that are easily exploited by small cadres of insiders and never seem to operate fairly, efficiently, and in the best interest of all.

We don't need creaky and arbitrary rules cooked up by politicians hundreds of years ago.

Coordination systems are just algorithms, which means they can be improved.

The term algorithm has taken on a spooky quality in the era of massive technology companies, but the concept isn't inherently dangerous. An algorithm is just a list of instructions intended to produce some outcome. All of us use algorithms all the time, such as when we cook a recipe or do some specific exercise routine. Voting systems are just algorithms.

For small groups of people it's usually possible to reach an acceptable consensus just by reading each other's emotions and talking and listening. But when too many people must be involved in a decision, there's too much noise and we can't possibly follow our natural algorithm. 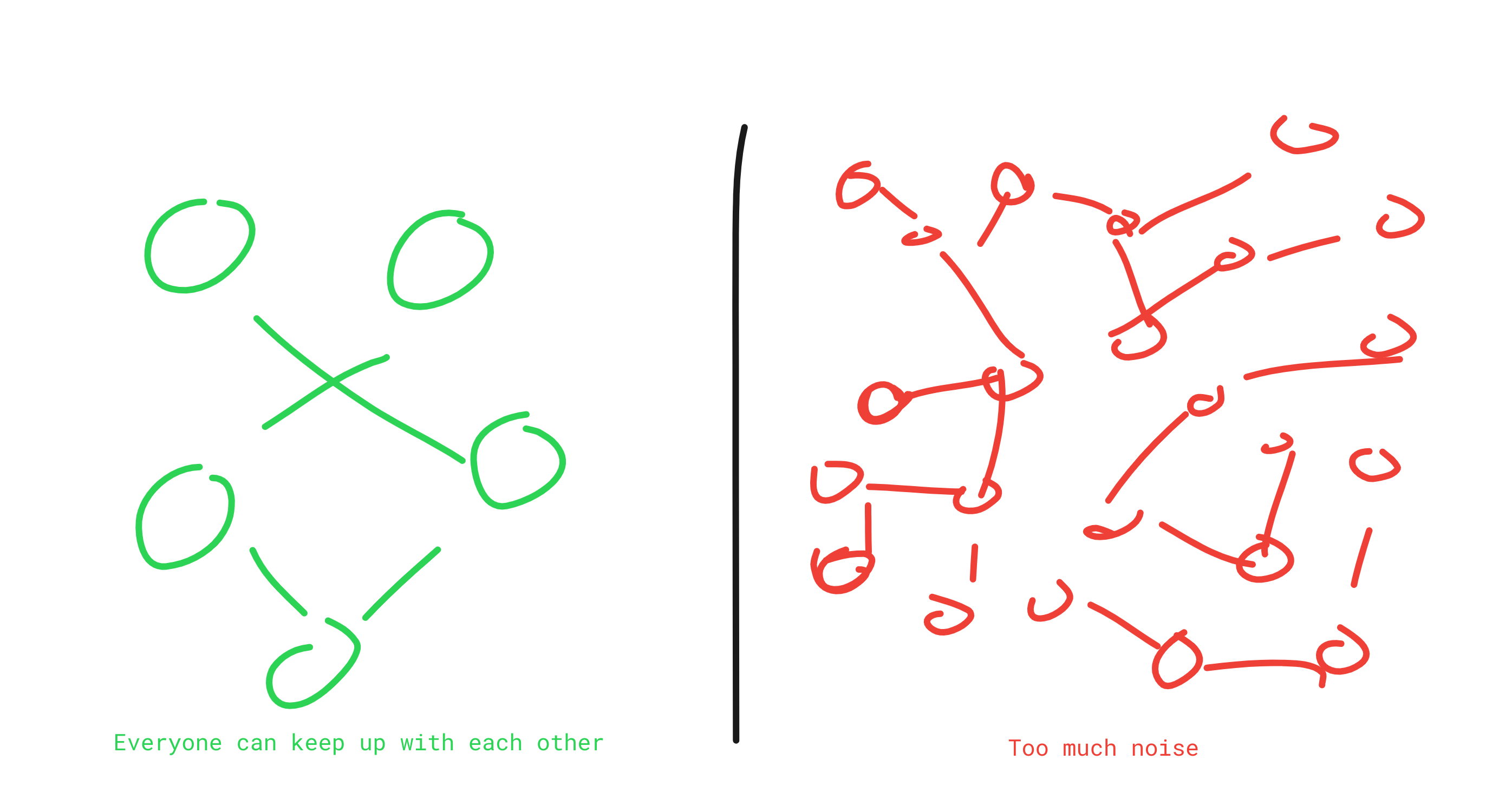 Voting systems were invented to solve this problem. Since we can't extensively interview every single voter, understand what they want, and easily combine everyone's preferences into a decision, we simplify the process. A voting system presents each voter with a discrete list of options to choose from and adds up the votes. 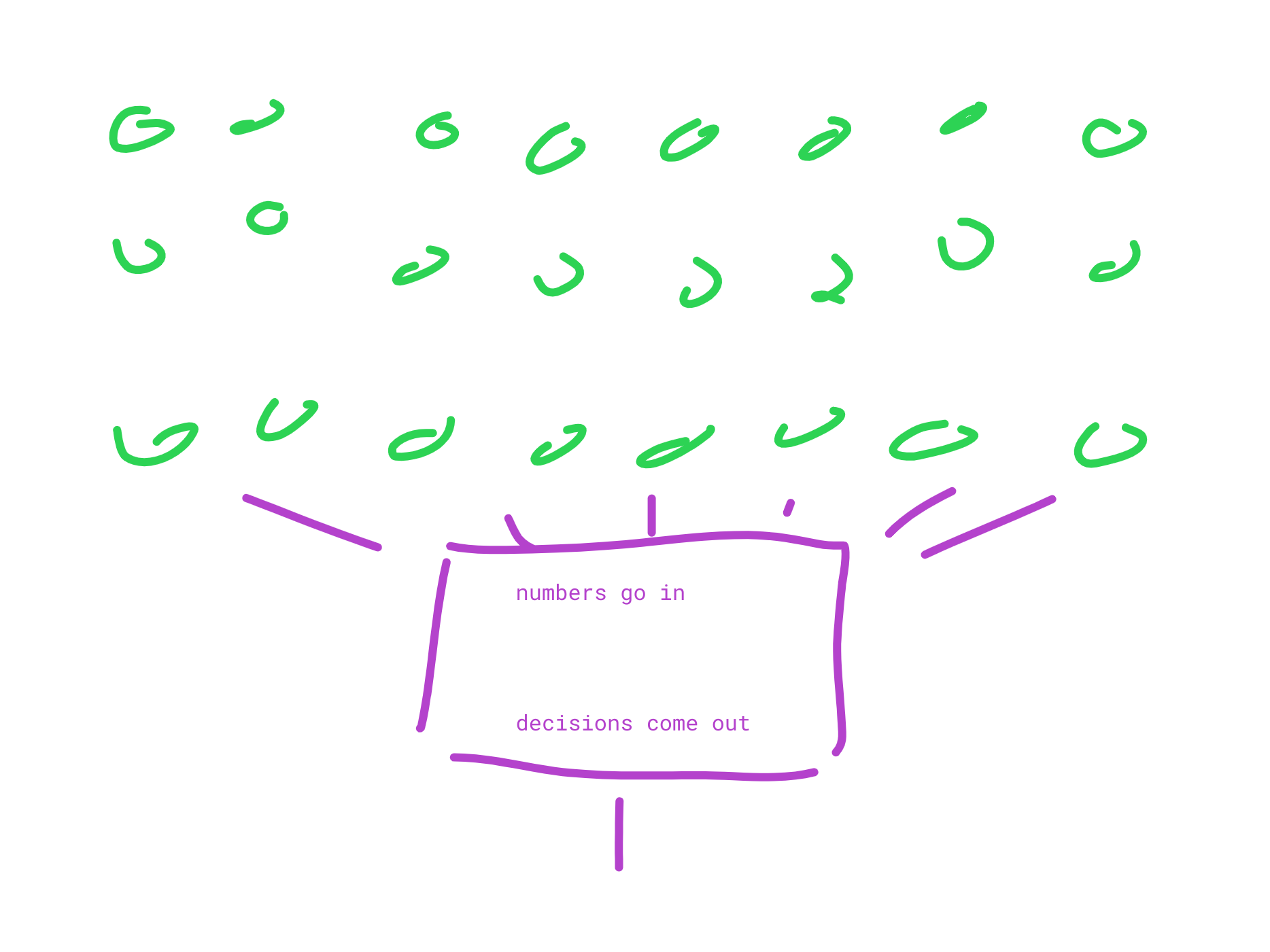 Since voting systems are just algorithms, they have a precise mathematical structure that can be studied. This means it's possible to prove things about an algorithm with the same certainty we know 1 + 1 = 2.

This means it's possible to design better coordination systems. Academic fields such as political economy and game theory study these questions, and try to come up with systems that perform better in different ways.

Math and logic aren't all we'll ever need of course. Logical theories can only reason about imaginary models of the real world. While they can help us avoid wasting time on clearly flawed experiments and point us toward possibilities we would never bump into with experiments alone, we still need to perform experiments to see if our imaginary logical models usefully align with reality.

But this realization still offers us a hopeful path, that our problems are less devilishly tangled than we thought. It's possible for us to use the same tools we've used for thousands of years, logic and experimentation, to get ourselves out of our current mess.

I was first introduced to this possibility when I encountered Aaron Hamlin discussing Approval Voting and how it could dramatically improve our democracy, and Glen Weyl discussing Quadratic Voting/Funding and other ideas espoused by the RadicalXChange foundation. Before hearing these scholars, I thought it was just unavoidable for a democracy to be a toxic mess. They opened up my thinking and helped me realize it's possible for us to implement democracy better. I was excited about Hamlin's and Weyl's ideas, and I learned as much as I could about them and other related ones.

But I slowly became convinced no one had fixed the problem enough. No one had presented a complete system for coordinating a democratic society, one that had the flexibility to allow an arbitrarily large group of people to cooperate without the need for creaky arbitrary rules and cadres of insiders.

This book presents a structure I think could act as the foundation of such a complete system, called Persistent Democracy.

Persistent Democracy uses a different paradigm of voting, called Persistent Voting, which isn't a voting method, but a different way of thinking about voting entirely. Persistent Voting could allow truly flexible and scalable direct democracy, such that we could abolish the concept of politicians entirely and allow any size group to democratically coordinate in arbitrarily flexible ways. A few key concepts make it so promising:

This book exists to fully explain Persistent Democracy, to explore the ways it can be used to combine, evolve, and generalize many different coordination systems, and plot a practical and realistic course to actually use it.

Whenever I speak with idealistic people about the world, I almost always find them in a state of despair. Many have thrown up their hands and given up even trying. I can't help but sympathize. The obstacles ahead are overwhelming, and most aren't our fault.

But here's the thing: we don't have any choice. If we don't solve these problems, they will steadily dismantle our society, and possibly destroy us entirely.

We have the obligation of hope. If we don't, perhaps arrogantly, assume we can figure it out, overcome these challenges, and make a better world, then our failure is a foregone conclusion. We have to start asking how we can solve these problems, not if we can solve them. Persistent Democracy and this book is my first contribution, and a gathering point I hope will inspire others.

Overview of this book

This book isn't structured in the typical way. Since a discussion of coordination systems can easily get extremely wonky and detailed, this book is structured like a tree with many small branches rather than a typical "straight line" book. There are only four main chapters, meaning pretty much anyone can get the big ideas in a single sitting. All chapters freely point to other "detail" chapters for those interested. The book is published as a website to accommodate the tree structure.

This book is open source, and a work in progress. This "tree" will continue to grow. Anyone is free to suggest edits or additions by submitting a pull request on the book's online repository.

Here are the main chapters:

The table of contents lists all finished detail chapters. Here are some particularly interesting ones:

I'm a skilled software engineer capable of immediately building usable implementations of Persistent Democracy, so it wouldn't be the most effective use of my time to gain the background necessary to create proofs the academic community would actually accept. I hope my proof sketches are interesting enough for daring academics to explore further! Please reach out to me if you decide to do this!